“If you’re not scared of death, how can you value life?”
– Sam Porter Bridges, Death Stranding

Death Stranding is a haunting experience. Once finished, it will leave you pondering its existential, beautiful, and nihilistic themes.

In an age where gameplay and storytelling follow predictable patterns, Death Stranding breaks the mold to deliver something unique.

Tired of playing the same old same old, it’s time to pick up this creation from Hideo Kojima.

What’s the game about?

You play as Sam Bridges, a deliveryman who travels across the post-apocalyptic USA to rebuild society after a devastating event called the “Death Stranding”.  The land you cross is desolate and bleak, yet strikingly beautiful. You encounter eerie and strange environments and creatures. You’ll have to use your skills to overcome these obstacles.

But what is it that makes this game so unique?

The mechanics and gameplay of Death Stranding

Could you summarize Death Stranding as a game of getting from point A to point B? In a way, yes, but you’d be missing out on all the other factors that come into effect when playing. Some argue that it is primarily a walking simulator (games that focus on exploration with less action). Yet within this, it contains something dubbed “the social strand system”. This focuses on online connectivity between players, where you interact and help each other. For example, when traveling across the terrain, you must overcome obstacles such as water and rocks. You may decide to use a ladder to climb a cliff. You can then leave that ladder behind, which will appear in other players’ games. This will allow them to use that ladder and leave a “like” thanking you.

It’s a valuable feature and helps combat the sense of isolation you feel while playing. This also touches on the building aspect of the gameplay, where you can build roads, buildings, and other structures to help you on your journey. You can be extremely extensive with this, building up whole sites and assisting other players through the “social strand system”.

There is the use of stealth and combat (your choice of which) when coming across enemies. You’ll have a range of tools and equipment at your disposal. Or alternatively, you can sneak past to avoid these confrontations.

While Death Stranding may have some elements of a walking simulator, it is not a traditional walking simulator due to its inclusion of action, stealth, and RPG elements, as well as its focus on online connectivity and player interaction through the “social strand system”. It is a unique blend of genres that offers a diverse and immersive gameplay experience.

The storytelling and atmosphere of Death Stranding

Death Stranding is a game that transports players to a world of desolation and despair, where the very fabric of reality has been torn apart. 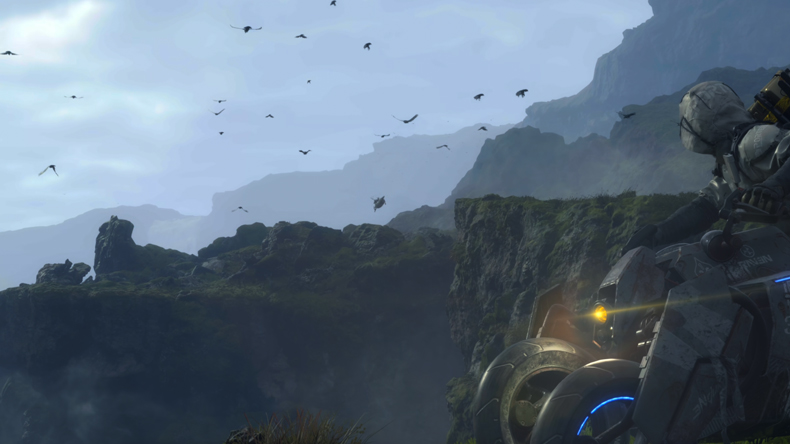 And it’s the storytelling and atmosphere that really set this game apart. The world is bleak and beautiful, serving as the perfect backdrop to the story. Emerald green grass sprawls across rocky crags and mountain tops, cut through by flowing streams and rivers. Trees are rarely seen.

You’ll encounter stunning vistas and breathtaking landscapes that are both awe-inspiring and foreboding. The player can feel the weight of the world’s history as they wander through abandoned cities and towns, where the only sound is the wind howling through the ruins. All of this compounds together to create something somber yet stunning at the same time.

The music used in Death Stranding plays a significant role in creating and enhancing the game’s atmosphere. The soundtrack features a range of moody and evocative compositions from Low Roar, a post-rock and electronica band. The soundtrack is expertly crafted to complement the game’s bleak and desolate world. And the music also helps convey the sense of scale and grandeur of the game’s world, with sweeping compositions accompanying the player as they journey across the land.

As you travel the mountainous terrain, you are confronted with the harsh realities of your journey when you see a breathtaking vista in the distance. In these moments, the music of Low Roar comes to life, adding an extra layer of emotion and depth to your experience. The use of music in this way is common in games. Still, how it is implemented in Death Stranding is particularly effective. It creates a sense of atmosphere and immersion that other games fail to achieve.

Death Stranding’s storytelling is one of its standout features. It has a rich and complex narrative that combines dystopia, sci-fi, horror, and survival elements. The game’s unique world is expertly crafted by developer Hideo Kojima. It is filled with fascinating characters and compelling plot points that draw the player in and keep them engaged throughout the game.

One of the ways the game tells its story is through the use of a database that provides background information and context for various aspects of the game’s world. This is optional, and players can ignore reading this, but many will find the information interesting and be eager to learn more about the game’s lore and backstory.

Death Stranding also includes a range of extensive cutscenes that feel more like watching a movie than playing a game. These scenes are well-crafted and integral to the game’s story, and many players will likely look forward to each one as they progress through the game.

Overall, Death Stranding’s storytelling is one of its standout features and is likely to be one of the things that sets it apart from other games. Its unique world and captivating narrative will leave a lasting impression on players.

In conclusion, Death Stranding is a game that breaks the mold and delivers something truly unique and memorable. Its blend of gameplay elements from various genres, stunning visuals, and captivating storytelling make it a game that stands out from the rest.

The game’s world is lonely and beautiful, filled with mysteries and secrets waiting to be discovered. Its atmosphere is one of bleakness and isolation but also one of hope and resilience as the player works to rebuild society and confront the darkness that threatens to consume it.

If you’re tired of playing the same old games and are looking for something different and truly memorable, then Death Stranding is definitely worth checking out.

Ready to explore the desolate landscapes of Death Stranding? Like this article and let us know!